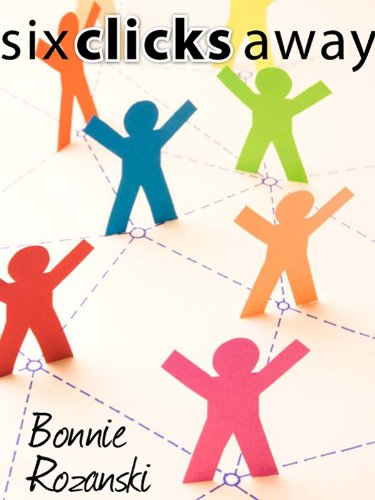 SIX CLICKS AWAY tells the story of a single ripple through a tangled web, and how one person can affect us all.

As miraculous as our wired world may be, everything connected to everything else eventually shows its downside. A rumor, a virus, a financial crisis – these days, they all cascade throughout the world in record time. SIX CLICKS AWAY tells the story of a single ripple through a tangled web, and how one person can affect us all.

In Bonnie Rozanski’s captivating novel, the social network becomes a stage for six indelible, interconnected characters: a lonely writer in Toronto, pining for her lost love; an unemployed engineer in Seattle who finds himself working at the Pike Place Fish Market. There is a young collections operator in Bangalore, India, who can’t stop caring about the people from whom she collects; and a seedy real estate magnate who gets his just desserts. Finally, there is a down-on-his-luck actor, an old friend of the Dalai Lama, who finds enlightenment from a most unlikely source.

A chain of falling dominoes is set in motion when Jeremy and Rachel, an unlikely duo of a geek and a Jersey girl, contact a friend on Myface.com, the largest social network on the planet. That friend contacts another, and another, each link bringing the pair one step closer to the goal of reaching the Dalai Lama, their choice of exotic target on the other side of the world. What they expect is that their simple classroom project will demonstrate “six degrees of separation,” the idea that everyone on this planet is connected in six short links to everyone else. What they get, however, is a cascade of the unexpected.