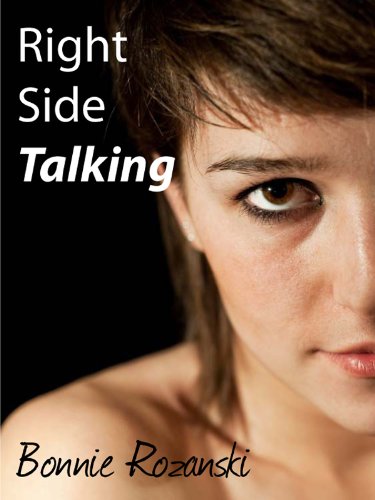 Imagine that you are a young girl with intractable epilepsy. As a last resort you submit to an operation to sever the connection between the two sides of your brain.

Imagine that you are a young girl with intractable epilepsy. As a last resort you submit to an operation to sever the connection between the two sides of your brain. Though the operation successfully reduces your seizures, you are left forever with two separate minds: left and right, each unaware of the other.

Imagine further that while recovering in the hospital, you witness a murder. Your dominant left brain cannot recognize unfamiliar faces, and is, therefore, unable to identify the killer. Your right brain can, but is unable to speak. Gradually, painstakingly, the right learns to spell out its thoughts in scrabble letters. At long last, on a table in a hospital lab, you describe the person who committed the crime. Too bad the killer is reading that very same message.….

Right Side Talking is a thriller that will grip the reader from its opening surgery scene to its dramatic courtroom climax. Its cast of characters: a 15-year-old epileptic; a brilliant surgeon; an unlicensed, resentful doctor from abroad who must work as an orderly; a grumpy, relentless detective, and a feisty psychologist Finally, most fascinating of all, there is the human mind itself.